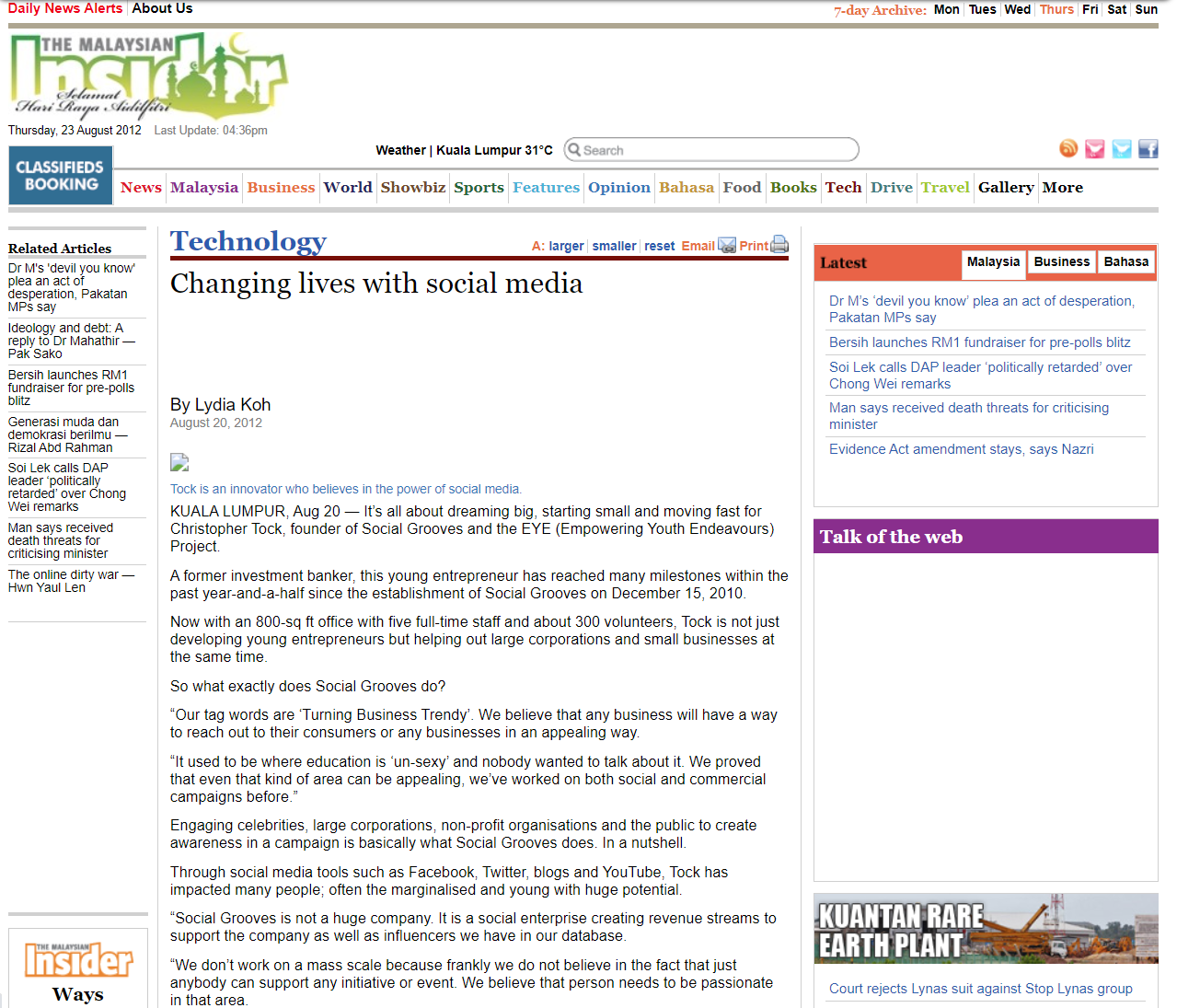 KUALA LUMPUR, Aug 20 — It’s all about dreaming big, starting small and moving fast for Christopher Tock, founder of Social Grooves and the EYE (Empowering Youth Endeavours) Project.
A former investment banker, this young entrepreneur has reached many milestones within the past year-and-a-half since the establishment of Social Grooves on December 15, 2010.

Now with an 800-sq ft office with five full-time staff and about 300 volunteers, Tock is not just developing young entrepreneurs but helping out large corporations and small businesses at the same time.

So what exactly does Social Grooves do?

“Our tag words are ‘Turning Business Trendy’. We believe that any business will have a way to reach out to their consumers or any businesses in an appealing way.

“It used to be where education is ‘un-sexy’ and nobody wanted to talk about it. We proved that even that kind of area can be appealing, we’ve worked on both social and commercial campaigns before.”

Engaging celebrities, large corporations, non-profit organisations and the public to create awareness in a campaign is basically what Social Grooves does. In a nutshell.

“Social Grooves is not a huge company. It is a social enterprise creating revenue streams to support the company as well as influencers we have in our database.

“We don’t work on a mass scale because frankly we do not believe in the fact that just anybody can support any initiative or event. We believe that person needs to be passionate in that area.

“Whether he writes on his blog or shares it on his Facebook and Twitter. It doesn’t mean anything to his audience. But if I work with celebrities or social media influencers who are interested in teaching, making Malaysia a better place — these are the guys we will work with and we work out a system where they benefit and we benefit on a campaign.”

A social media influencer himself, Tock has a network of friends who he constantly engages with to make Malaysia a better place. He is motivated to make a difference in Malaysia and he collaborates with the local community, touching lives in a tech-savvy way.

“We once ran a campaign with Jaya One, Assunta Hospital, PJ Live Arts as well as Asia Assurance. The four of them collaborated to create something called Passionately You.

“It was a project to create breast and cervical cancer awareness. What we did was we planned a campaign called Don’t Duck It. We got social media influencers like Niki Cheong, Suanie Tew and others who have one way or another experienced cancer in their families and who passionately supported this initiative.

“One of the things we did quite differently was we had this campaign where we threw paint at these celebrities and we asked them to face the paint with their eyes open because you shouldn’t be afraid. Don’t duck it, don’t duck your tests for your own sake. That’s the angle that we went with. We get involved with people who are really into any message or campaign and do it in an unorthodox manner.”

An innovator who has an optimistic outlook on life, Tock could have stayed in the UK after his studies but he wanted to put a plug on the whole brain-drain issue. His mentor, Ong Kian Ming, who is a political adviser, was the one who pushed Tock to institutionalise the things he was doing.

“He (Ong) told me I was doing a lot of great work on my own back then because I helped start up UKEC, which is a group of Malaysian students studying in the UK, and connect them using social media so they were aware of Malaysian affairs,” explained Tock on how Social Grooves started.

Calling himself a community facilitator of sorts, Tock is also involved in other projects such as Random Alphabets which uses social media for event organising.

“In the future, we will use social media to organise every aspect of our lives. From our business appointments to our personal social events to your waking up, your sleeping — it will be so integrated that we will be able to do many other things in a faster and more efficient way,” said Tock.